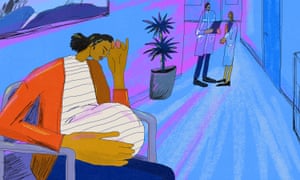 When Jessica Roach’s second daughter was born premature, at just 34 weeks and five days, Roach found herself living a statistic that she knew intimately. What began as dizzy spells, nausea and food aversion became a condition that called for bed rest; her cervix, it turned out, was dilating too early. An African American woman living in Columbus, Ohio, Roach experienced a pregnancy rife with health challenges, despite having a job as a nurse at Ohio State University and access to medical care just floors from where she worked.

Roach’s story is an extremely common one for African American women in the United States, who are two to three times more likely than white women to give birth to a premature child. African American women are also four times more likely to die as a result of pregnancy and childbirth, and their infants are twice as likely to die within the first year of life.

While Roach and her daughter both survived childbirth, the obstacles led Roach to focus her career on supporting other mothers like her. In 2017, after 18 years spent working as a doula and a home birth midwife, and having finished a degree in public health and given birth to a third daughter, Roach founded the reproductive justice organization Restoring Our Own Through Transformation (Roott).

Roach is part of a growing movement trying to address the health and wellbeing of black women during pregnancy and childbirth in the United States, and create interventions to ensure that more parents and children make it through the process safely. Among these initiatives is the Black Mamas Matter Alliance (BMMA), of which Roott is a partner. BMMA, which was founded in 2016, works to change policy, culture and research in order to advance maternal health for black women.

There has also been a marked increase in the national attention paid to racial disparities in maternal health and their underlying causes. In 2007, NPR launched a series called Lost Mothers, focusing on high rates of maternal mortality. And the New York Times magazine ran a cover story last April that boldly addressed the question of what exactly is behind these disparities, coming to the same conclusion that Roach and many of her colleagues have: racism.

“I had a preterm infant after I’d addressed what were the supposed social determinants of health,” Roach told me. She is referring to the elements commonly understood to influence these disparities: social and environmental conditions like poverty, access to care, housing and education. By the time Roach had her second daughter, she no longer lived in the projects, and had access to quality healthcare. But what those social determinants don’t fully explain, said Roach, is the stress of daily life for black people. In a 2018 TEDx talk, Roach explained: “The activities of daily living of being a black woman in America, being a black man in America, being a black family in America, increases the pressure on our allostatic load or weathering. Our bodies start breaking down simply because the moment we get up in the morning we have all these variables we have to consider.”

This idea is backed up by research that demonstrates a connection between discrimination and poor health. Jennie Joseph, a midwife in Florida who is often cited for her pioneering work in this area, refers to the concept, in the arena of maternal health, as materno-toxicity. Joseph told me that materno-toxic zones describe the conditions that prevent a mother-baby pair from thriving. “For example, if you are in the middle of the hospital, like Serena Williams [who almost died after giving birth by C-section due to a blood clot in her lung and had to advocate on her own behalf to get the care she needed], you are now in a materno-toxic zone because the people around you perceive, respond and react to you in a way that puts your life in jeopardy. It doesn’t matter where you are – the materno-toxicity is created around you, perhaps because of your color, your race, your socioeconomic status, your ethnicity, etc.”

Roach’s health was affected by the expectations and racism she faced in her workplace, where, she said, she “had to perform at 120% whereas my white counterparts only had to perform at 80%”. Studies regarding the impact of stress on health during pregnancy show how such conditions can create the kind of outcomes that Roach faced. And stress may actually be higher for middle-class women of color like Roach, who have to deal with the pressures of succeeding in white-dominated institutions. This dynamic may explain why middle-class black women face higher rates of infant mortality than low-income white women.

As leaders like Roach and Joseph investigate why these disparities exist, they are also creating programs that are offering solutions. Through Roott, Roach and her team have developed a direct service model that utilizes doulas from the community; they offer support throughout the entire pregnancy and into the child’s first years of life. Roach said Roott’s clients have seen very positive outcomes. “We’ve never lost a mother. Less than 5% have had maternal complications. No significant complications with our infants.”

Joseph runs a prenatal care clinic near Orlando, where her clients experience significantly better outcomes than similar women in the area who don’t receive her care. Ebony Marcelle, a black nurse-midwife and director of midwifery at the health center Community of Hope, in Washington DC, also runs a prenatal care program that exceeds local statistics.

Determining why these programs are able to produce the results they do is a difficult task, but there are a number of things that unite them. Comprehensive, consistent and accessible care, starting early in pregnancy and extending into the infant’s early life, is one. Another is the creation of a supportive environment – whether through prenatal clinic care or doula visits – and social and emotional support likely to buffer the daily stresses of racism. And these programs are led by, and designed for, women of color – in particular black women. Said Roach: “The key is our experiences. Our voices and our experiences are the basis of our care. It’s informed by the information that we bring to the table ourselves.”

When asked how having access to a program like her own might have changed her daughter’s birth, Roach teared up. “I wish I would have had somebody like some of my doulas when I had my baby. Because it would have been different. It would have been completely different. I wouldn’t still be questioning myself 19 years later, asking if I did something wrong.”