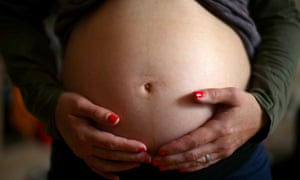 When Harry spoke to the press in his dazed and delighted way after Meghan had given birth, he said: “How any woman does what they do is beyond comprehension.” I guess he meant labour, childbirth, that everyday agony and ecstasy that is part of women’s lives. How do we do that? After months of feeling not too grand while exposed to every myth going and being told what to eat, wear and how to behave, we have to get the baby out somehow. It’s what we do.

Some women love being pregnant, some really don’t. Some sail through feeling mostly normal; others are sick, exhausted, permanently worried and just want it to end. Being pregnant is an ordinary thing that happens to women and yet it is absolutely extraordinary. Few tell the whole truth about it, as so often we are told to enjoy what is the most dangerous and precarious rollercoaster we will ever get on.

I remember a woman telling me when I was first pregnant that the whole deal was like “a major car accident” and that it would take me two years to get over it. Wow, thanks mate. Luckily I was young enough to carry on life as normal – but each woman is different and each pregnancy is different. None of us are helped by exhortations to be blooming, nor by the assumption that we have joined some communal petting zoo in which strangers can pat our bellies or give us unsolicited advice about cheese and wine.

Some women are traumatised by the whole experience because it is so primal, so totally blood and guts (have you ever seen a placenta?) and yet we have built an entire culture of fluff and cuteness around baby stuff as if in complete denial. Growing another person inside you and then pushing them out or having them cut out of you (if you think I am being too graphic, I wonder if you know where babies come from) is as basic as it gets. Let no one tell us that female biology is somehow a construct. Uterus transplants remain a while away. Try telling a woman in the throes of labour that biology is optional and she may well deck you.

So far, so female. But to be a woman is so often to be told what you already instinctively know by a man in authority. This time by one Herman Pontzer of Duke University, North Carolina, in a journal called Science Advances. He has been reviewing the world’s most physically demanding pastimes. Obviously one is the Tour de France. Days and days on a bike; more than 2,000 miles and years of training to get a yellow top. These guys are working at maximum lung capacity. What heroes. What an endurance test.

The human ability to extract energy from food shows us the limits of what our bodies can do. Certain athletes are burning several times the amount of calories at peak performance than they are at their resting metabolic rate. And guess what? So are pregnant and breastfeeding women, who are of course pregnant for a lot longer than the duration of the Tour de France. “If you think about pregnancy, it is the ultimate endurance activity,” concludes Pontzer.

Apparently, Ironman triathlons and polar trekking don’t come close to the body energy expenditure of being pregnant, with rates levelling off after 20 or so days on the road. What is key is the metabolic resting rate: marathon runners perform at 16 times theirs, cyclists at five times and an Antarctic trekker at 3.5 times. In contrast, a pregnant woman, who is usually working and carrying on as normal, is functioning at 2.2 times her resting rate. But she will do this for 280 days, something these mega athletes could only dream of. No one cheers pregnant women over the finishing line. None of us get a trophy.

A normal pregnancy is not an illness but it certainly feels like an endurance test: perhaps I didn’t need a study to tell me that, but we have one anyway.

The pregnancy endurance test is emotional as well as physical – I’m sure another study involving bears and woods will come along soon to confirm that. Meanwhile, men will continue with their amazing feats of endurance – showing us the great strength that humans are capable of – while the rest of us simply get on with it. It’s beyond comprehension all right.