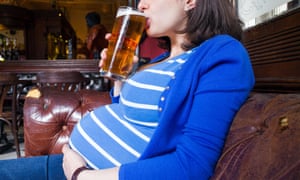 Alcohol firms and bodies they fund are encouraging women to drink in pregnancy – putting their unborn child in danger – by publishing false and misleading information about the risks involved, new research claims.

The alcohol industry is ignoring scientific evidence as part of a drive to “nudge” mothers-to-be into drinking as part of a deliberate strategy to ensure women keep consuming their products because young people are turning away from them, researchers say.

Industry bodies globally are casting doubt on government health advice to abstain from alcohol altogether during pregnancy, and misrepresenting evidence showing that drinking then can lead to the baby suffering brain damage or congenital abnormalities or being born prematurely.

Alcohol producers and social responsibility organisations they fund such as Drinkaware in the UK are publishing information on websites and apps that says “light drinking” in pregnancy is safe, or denying that consumption is linked to a baby having foetal alcohol spectrum disorder.

Some of the sources of information that the British researchers studied promote the idea that certain women may be able to keep drinking some alcohol while expecting. For example, while the rum producer Bacardi acknowledges that drinking in pregnancy is “risky”, it also claims that “what is ‘too much’ may vary by individual”, even though this contradicts existing evidence.

Others were “ambiguous” about the risks involved, which also include the child being small for its gestational age. For instance, Educ’alcool, an industry-backed body in Canada, maintains that “[the] risk to the foetus is reduced considerably if you have only one drink every now and then”.

The government and four UK home nations’ chief medical officers’ joint view is that women should avoid alcohol completely while they are pregnant.

The findings are published in the Journal of Studies on Alcohol and Drugs. The academics analysed information about alcohol and pregnancy issued by 23 firms such as Heineken and Diageo and industry-funded bodiesin six countries: Britain, Ireland, the US, Australia, New Zealand and Canada. They then compared that to material published by public health bodies and authorities.

Information published by the industry sources studied often did not mention the need for total abstention and instead used language that endorsed continuing to consume some alcohol. Some ignored, downplayed or sparked confusion about the scientific basis of official advice.

Prof Mark Petticrew of the London School of Hygiene and Tropical Medicine, the lead author, said: “Across alcohol industry-funded organisations there appears to be a consistent strategy to the delivery of information on alcohol consumption and pregnancy. One possible reason is that women are a crucial part of the alcohol market. Pregnancy, therefore, may represent a significant commercial threat to the alcohol industry.

“This study provides further evidence that these organisations pose a potential risk to public health, specifically to the health of pregnant women and the baby, and should have no role in disseminating health information.”

The paper says that: “The strategies outlined (omission, framing and linguistic ambiguities) may reflect the alcohol industry’s protection of the female market, with the common goal of ‘nudging’ women towards continuing to drink during pregnancy.”

The researchers accuse Drinkaware of several dubious practices. For example, it gives accurate information about how alcohol crosses the placenta but then confuses matters by adding: “How a baby will be affected depends on how much its mother drinks and the mother’s metabolism. Evidence suggests that diet is also important, with poor maternal nutrition increasing the risk of harm to the unborn baby.”

In addition, Drinkaware’s advice on pregnancy, breastfeeding, foetal alcohol syndrome and fertility are the last four sections of a 45-section area of its website, which means anyone wanting to read it has to scroll through nine pages of other information. It also states that “it can be hard to know where to go for trustworthy advice … especially … when it comes to advice about drinking alcohol when you’re pregnant.”

Katherine Severi, chief executive of the Institute of Alcohol Studies, a thinktank that is independent of the industry, said: “It’s worrying to think pregnant women might be putting themselves at greater risk of health problems due to an information vacuum. Alcohol companies are not medical experts, they are experts in selling alcohol.”

She called for labels warning pregnant women not to drink to become compulsory on all alcoholic products and ministers to fund public awareness campaigns about the risks involved.

Prof Sir Ian Gilmore, the chair of the Alcohol Health Alliance UK, claimed the industry was “distorting information available to alcohol consumers; putting the health of both mothers and babies at serious risk. Misleading information on the safety of alcohol consumption for pregnant woman is likely to contribute to the fact that more than 40% of women in the UK continue to drink during pregnancy and four times as many children have alcohol-related birth defects than the global average.”

Drinkaware denied any wrongdoing. A spokesperson said information on its website was “crystal clear … that that the safest approach is to not drink at all during pregnancy, or if you’re trying to conceive. It states, for example, that ‘drinking alcohol at any stage during pregnancy can cause harm to your baby and the more you drink, the greater the risk.

“The information we provide is overseen and verified by an independent medical advisory panel, consisting of highly experienced health professionals.”

The Department of Health and Social Care said: “We have been clear that the alcohol industry must reflect the UK Chief Medical Officers’ alcohol guidelines. They can be reflected simply by a reference to the weekly recommendation of 14 units, the no drinking in pregnancy logo and the Drinkaware logo.”

We have some news…

… about how we will respond to the escalating climate crisis – we will not stay quiet. This is the Guardian’s pledge: we will continue to give global heating, wildlife extinction and pollution the urgent attention and prominence they demand. The Guardian recognises the climate emergency as the defining issue of our times.

Our independence means we are free to investigate and challenge inaction by those in power. We will inform our readers about threats to the environment based on scientific facts, not driven by commercial or political interests. And we have made several important changes to our style guide to ensure the language we use accurately reflects the environmental catastrophe.

The Guardian believes that the problems we face on the climate crisis are systemic and that fundamental societal change is needed. We will keep reporting on the efforts of individuals and communities around the world who are fearlessly taking a stand for future generations and the preservation of human life on earth. We want their stories to inspire hope. We will also report back on our own progress as an organisation, as we take important steps to address our impact on the environment.

More people in India, like you, are reading and supporting the Guardian’s journalism – made possible by our choice to keep it open to all. We do not have a paywall because we believe everyone deserves access to factual information, regardless of where they live or what they can afford.

We hope you will consider supporting the Guardian’s open, independent reporting today. Every contribution from our readers, however big or small, is so valuable.